Weight sensor in resonance with a PLL virtual

Development of a resonant sensor of mass controlled by a virtual PLL programmed in LabVIEW with a resolution of  2 µg.

This project was created from the study of sensors based on resonant lever scales with atograms resolution to submicron dimensions monolithically integrated into CMOS circuitry.

The implemented prototype is composed of a millimeter and resonant lever with which wereached accuracies of micrograms by vibration of a current speaker audio. The project consists of a software development based on LabVIEW and hardware development, with data acquisition system, IP Control, conditioner cirtuit Senar and printed board PCB.

Vibrating the piezoelectric sensor (lever) and the image on the left causes a deformation of the material which in turn produces electric current at a certain frequency (fo) When placed over the sensor material, like a drop of alcohol or other material, causes a change in the resonance in the electric generation for which we are able to measure this gap and to know the weight of the drop.

In addition, we can see in terms of time as a drop of liquid on the sensor evaporates, and the weight recorded in the software is reduced back to its initial scan. The following figure shows the frequency change with time resulting in a drop of ethanol over the sensor. As is observed in only 80 seconds to evaporate completely. The experiments were performed with other materials such as distilled water, all of them with different times of evaporation (Cap 6). 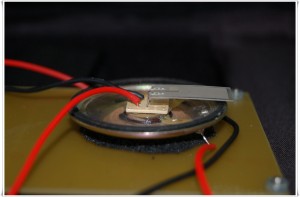 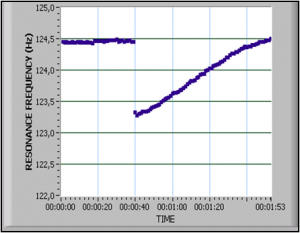 Final Project in PDF: (in catalán)